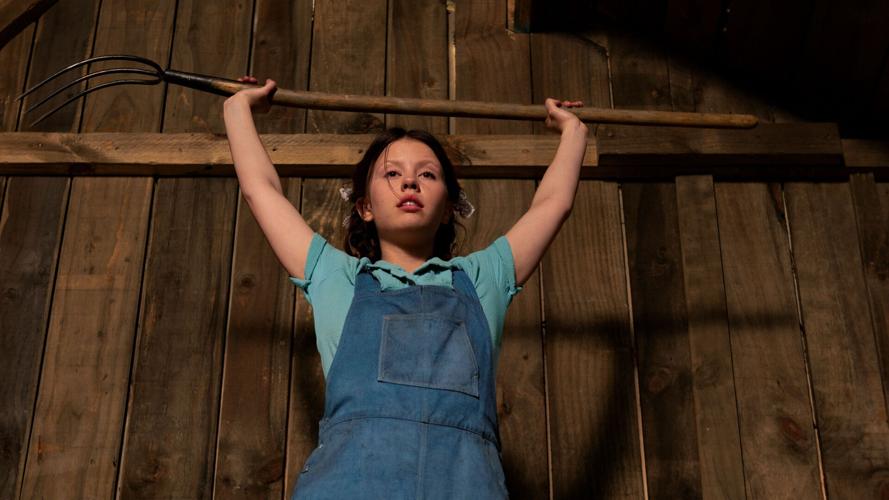 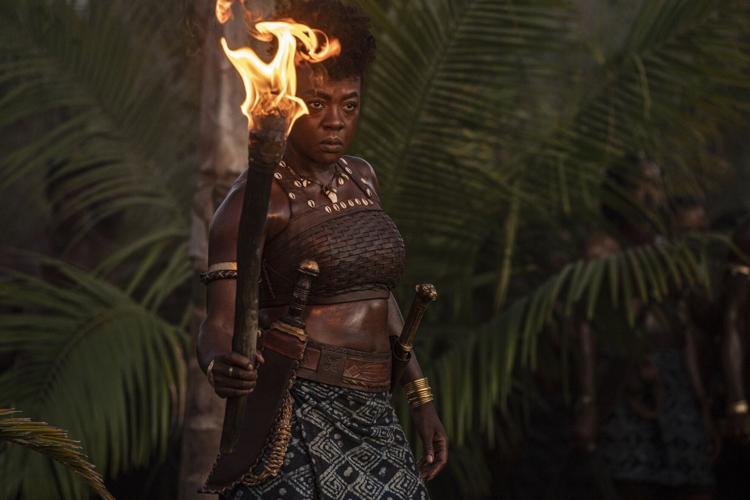 Viola Davis in 'The Woman King.'

In The Woman King, a new Gina Prince-Bythewood-directed epic in Braveheart (1995) mode, reliable chameleon Viola Davis transforms into an indomitable warrior. She plays Nanisca, the head of the all-women army — the Agojie — that in real life protected the West African kingdom of Dahomey from roughly the 17th through 20th centuries. We first meet Nanisca not in repose but at her most alert: in battle, stealthily and ferociously mowing down with her trusty machete an encampment holding captive a group of kidnapped Dahomens. Plenty of Davis’ roles have given her the chance to verbally cut someone down a few sizes. Here, the task transmutes into the physical. Davis so immediately embodies Nanisca’s unflinching combat skills that, post-battle cry, we need no time adjusting to the fact this is Davis’ first time in action heroine form. She has the force of someone who’s filled the archetype regularly. Davis has said in interviews that she considers this her magnum opus performance. By the time The Woman King — wherein she digs into her emotional range, too — is over, you’ll likely find it hard to disagree with her.

Written by Dana Stevens, The Woman King is set in a richly realized recreation of West Africa in 1823; it’s forgivably visually cheapened only once in a while by flashes of CGI simulating big crowds and imposing vistas. The film features an excess of subplots — the primary one of which follows Dahomey efforts to shirk the influence and demands of the neighboring, far more powerful Oyo empire, which collaborates in the Western slave trade that has, in turn, also financially benefitted the Dahomey kingdom. Nanisca, who is fictional, is morally opposed to continuing to reap the advantages of what amounts to a deal with the devil. The new young Dahomey king, Ghezo (John Boyega), respects Nanisca so much more than anyone else in the kingdom that he greets her suggestions that they try financially relying instead on palm oil or gold sales with an open ear.

The Woman King concurrently tells a coming-of-age story. Around the time we get a feel for the film’s stakes, we meet 19-year-old Nawi (Thuso Mbedu), whose father exasperatedly dumps her at Ghezo’s palace after refusing an arranged marriage. But this fatherly last-ditch effort proves far more enriching for Nawi than a life confined by brutish domesticity. After she’s taken in by the Agojie, Nawi immediately becomes a standout among her peers, both temperamentally and in practice battle. Her frequent back-talking and naïve questioning of authority is met with the kind of superficial disdain underneath which you can sense admiration from those above her.

From her character arc springs one of the movie’s best beats — the practically sororal relationship she forms with the pragmatic, witty Izogie (an awesome Lashana Lynch) — and also one of its worst, a phony-feeling will-they-won’t-they romance meant in part to signify that love and toughness don’t have to be as mutually exclusive as abstinence-practicing Agojie rules essentially say. (Though we’re never actually worried, it’s also meant to call into question just how devoted Nawi is to her sisters in arms.) The romance is with an airport potboiler-sexy Portuguese-Dahomen guy (Jordan Bolger) increasingly ambivalent about his role in the slave trade; though Bolger’s arms and tumid ab muscles aren’t so bad to look at, his presence doesn’t do anything to enhance the movie.

The Woman King is a logical evolution from Prince-Bythewood’s last movie. In The Old Guard (2020), an action film headlined by Charlize Theron, we followed a cadre of immortal assassins dealing with a new existential threat. It was dropped off on Netflix when the world was still deep in lockdown mode; it’s not a great movie. It did, though, establish Prince-Bythewood — who had by then built her movie career mostly on emotionally mature, intimate dramas (including her 2000 romantic masterpiece, Love & Basketball) — as a more than capable director of action.

If The Old Guard was like a rehearsal, The Woman King is a rightfully confident showing-off of her latest creative step forward. Galvanizing action sequences abound; they manage to at once be physics-damningly acrobatic and naturalistically attentive to the hellaciousness, not as much heroism, central to war and battle. Prince-Bythewood doesn’t ignore the fragilities of the human body in The Woman King, but she especially foregrounds the everyday superheroism they’re capable of. It’s endlessly exciting seeing the crackerjack Agojie — a force on which the Dora Milaje soldiers of the Black Panther comics were based — flex. It’s also exciting more broadly to see Black women anchor the kind of historical action epic nearly always dominated by white men.

As emotionally affecting as it is thrilling, The Woman King is a towering achievement. But I would be remiss not to note that it’s also a complicated one. Historical movies by design require the fudging and whitewashing of fact in their quest to cram unwieldy life into satisfactory, relatively tidy cinema. But hardest to swallow about The Woman King is its smoothing over of Dahomey’s and the Agojie’s real-life role in perpetuating slavery, which, by most accounts, was far uglier and more involved than what’s depicted here. Prince-Bythewood and Stevens don’t outrightly obfuscate the truth; several characters make it clear that they don’t mind being complicit in chattel slavery as long as Dahomey benefits in the long run. And you never sense the movie trying to shove characters and factions into a simple good-bad binary, either. But because this PG-13 epic is aiming for populist appeal, this central conundrum is downplayed to the point that we’re meant to ultimately cheer for the Agojie for the most part unreservedly. It’s a prickly point in an otherwise rousing movie whose spot in the modern historical-epic pantheon feels all but guaranteed.

BARELY SIX MONTHS HAVE PASSED since the release of X, Ti West’s excellent homage to the slasher movies of the 1970s and ‘80s. Already, we’re getting an unnecessary follow-up: a secretly shot prequel movie called Pearl. It explores the backstory of the bloodthirsty title character who, in X, spent most her screen time violently picking off the group of people renting the guest house on the outskirts of her and her husband Howard’s (Stephen Ure) rural Texas farm.

Mia Goth played both a young woman named Maxine and, assisted by mounds of prosthetics, the elderly Pearl in X. In the new film, set in 1918, Goth sheds the artificial layers of crepey, sun-spotted skin to play Pearl as a fresh-faced 20-something, still living on the farm where we first met her. Now, though, she inhabits it with her sympathetically strict German-immigrant mother (Tandi Wright) and a father (Matthew Sunderland) permanently paralyzed from his bout of the Spanish flu. Pearl, who does much of the caretaking, feels trapped, tethered by family responsibility and dependent on Howard, whom she only recently married and who is now off fighting in the war. Rapt by the movies she sometimes catches when she bicycles to town for groceries — a hobby about which her mother is understandably not happy because the family is so strapped for cash — Pearl yearns for a career in film, her specialty dancing.

Pearl didn’t just become a murderer overnight in X, the new movie quickly clarifies. Her capacity to kill is announced right away in Pearl when she spears with a pitchfork an innocent goose who wanders onto the property and feeds it to the crocodile she loves like a pet dog in the pond out back. Cruelties, from pinching her father’s hand as hard as possible to see if he’ll flinch to smashing one of her beloved crocodile’s eggs, only pile. Something deadly seems especially to be ignited in her after getting word of a dance audition at the local church. If she gets a spot in the troupe, she might tour the country. Pearl wants to be famous so badly — to leave behind this place shackling her — that she starts to quite literally forbid anybody from standing in her way. Pearl is technically a slasher film, though it’s neither as fun nor suspenseful as X or most other classics of the genre. It’s more aligned with outliers akin to something like Roman Polanski’s Repulsion (1965), where an isolated young woman descends into the kind of madness promising death for anyone getting mixed up with her amid the downward spiral. Pearl ping-pongs between treating Pearl’s eruption seriously and with winking camp; it never quite finds a consistent tone.

Like X, Pearl applies the aesthetic sensibilities of a bygone cinematic era to its presentation, though with more misalignment. X was set in 1979 and made a point to look and sound like it was released that year, too. Pearl, though, texturally mimics not the still-nascent silent-movie style of the late-1910s but the kinds of melodramas Douglas Sirk and Joshua Logan were directing in the 1950s, with its generous use of beautifully unnatural pastel and primary colors and a sweeping orchestral score from Tyler Bates and Tim Williams. Inspiration from The Wizard of Oz (1939) and, with its emphasis on operatically thorny mother-daughter relationships, movies like Stella Dallas (1937) and Mildred Pierce (1945), are also clear. West concocts a handsome-looking and -sounding movie from an easy-to-envision mood board, and Goth’s subtler work in X is allowed to go to showier, far more intense places. What Pearl goes for is admirable, especially considering how few horror sequels so sharply pivot in style and approach from their predecessor. But it can’t shake off both the listlessness one feels when a movie can’t overcome its unnecessity, and also how much more genuinely exciting a statement X was. Pearl does undoubtedly strengthen the commitment of X’s homage, though. What slasher movie is truly complete without a disappointing follow-up? Another sequel, MaXXXine, is now in development.