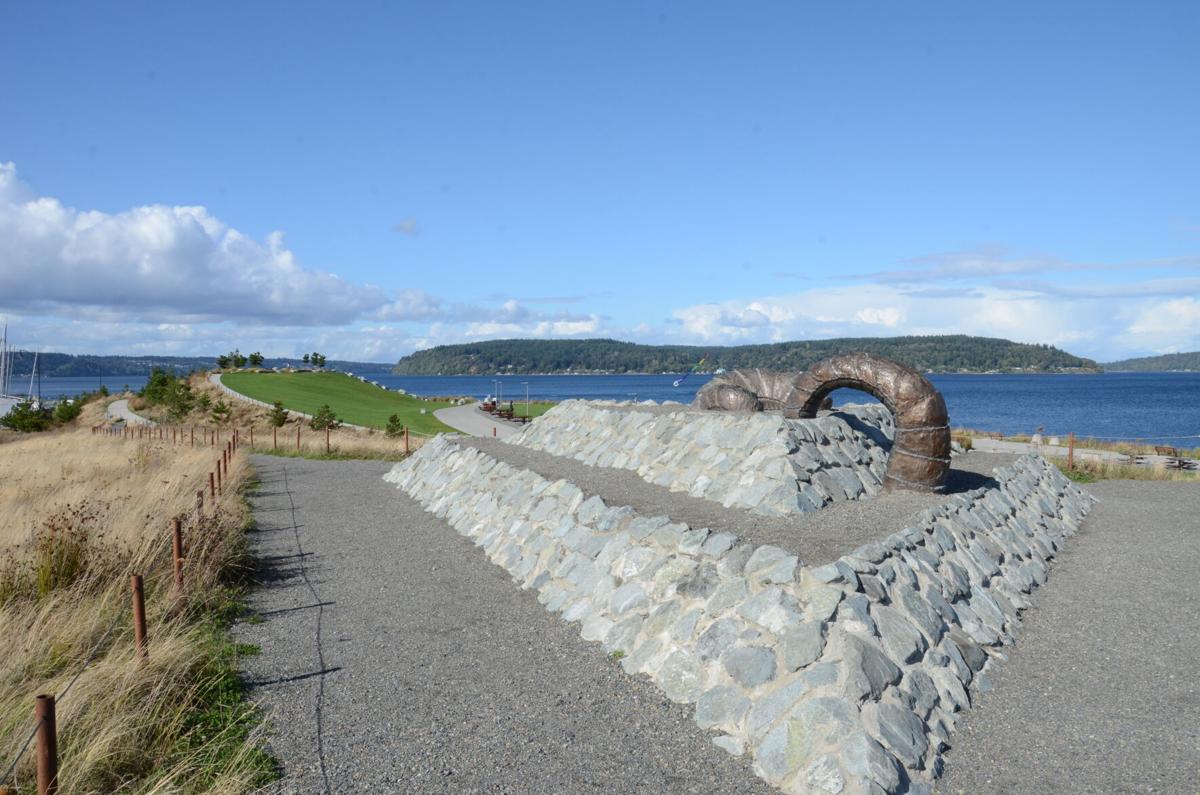 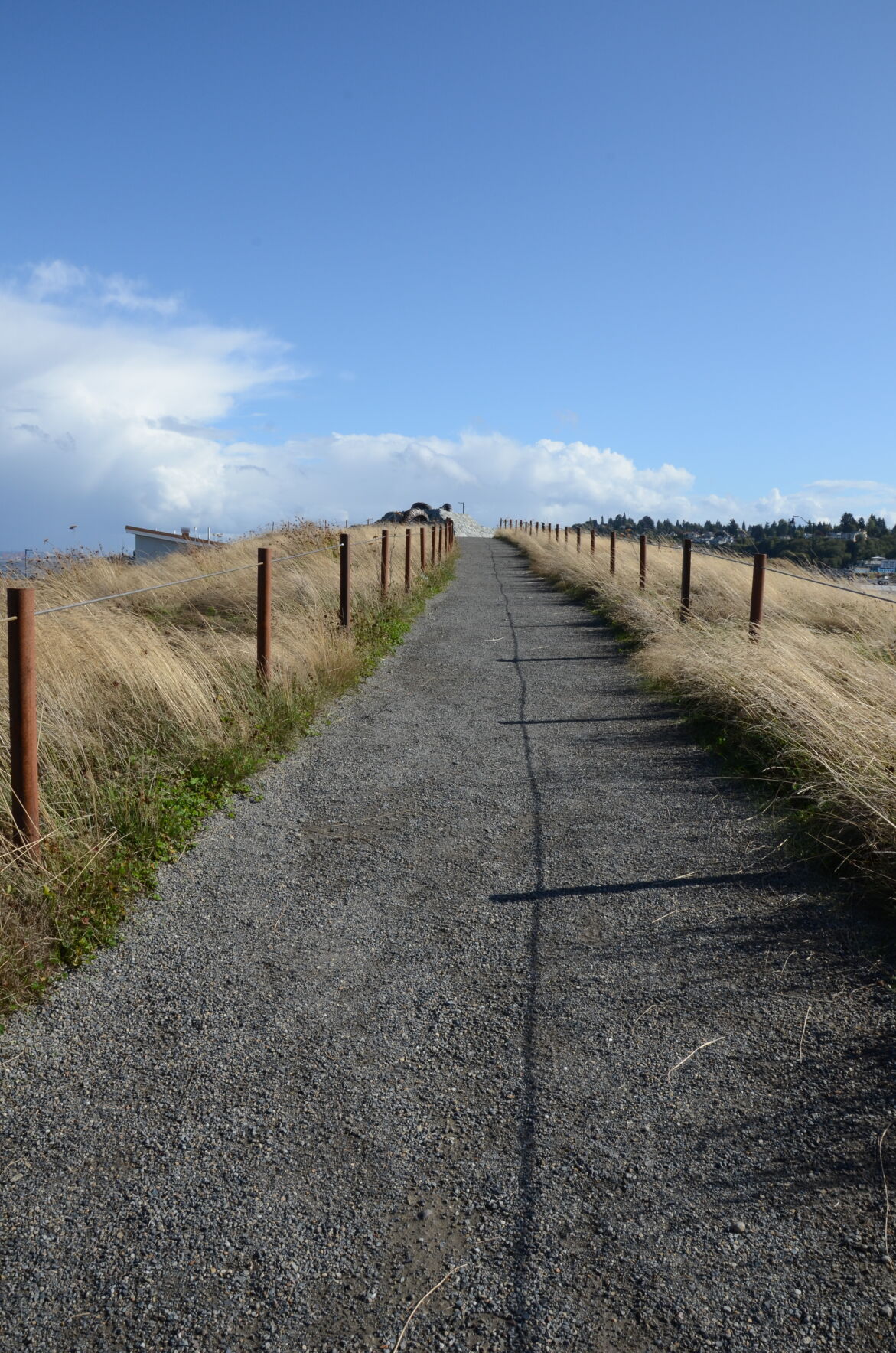 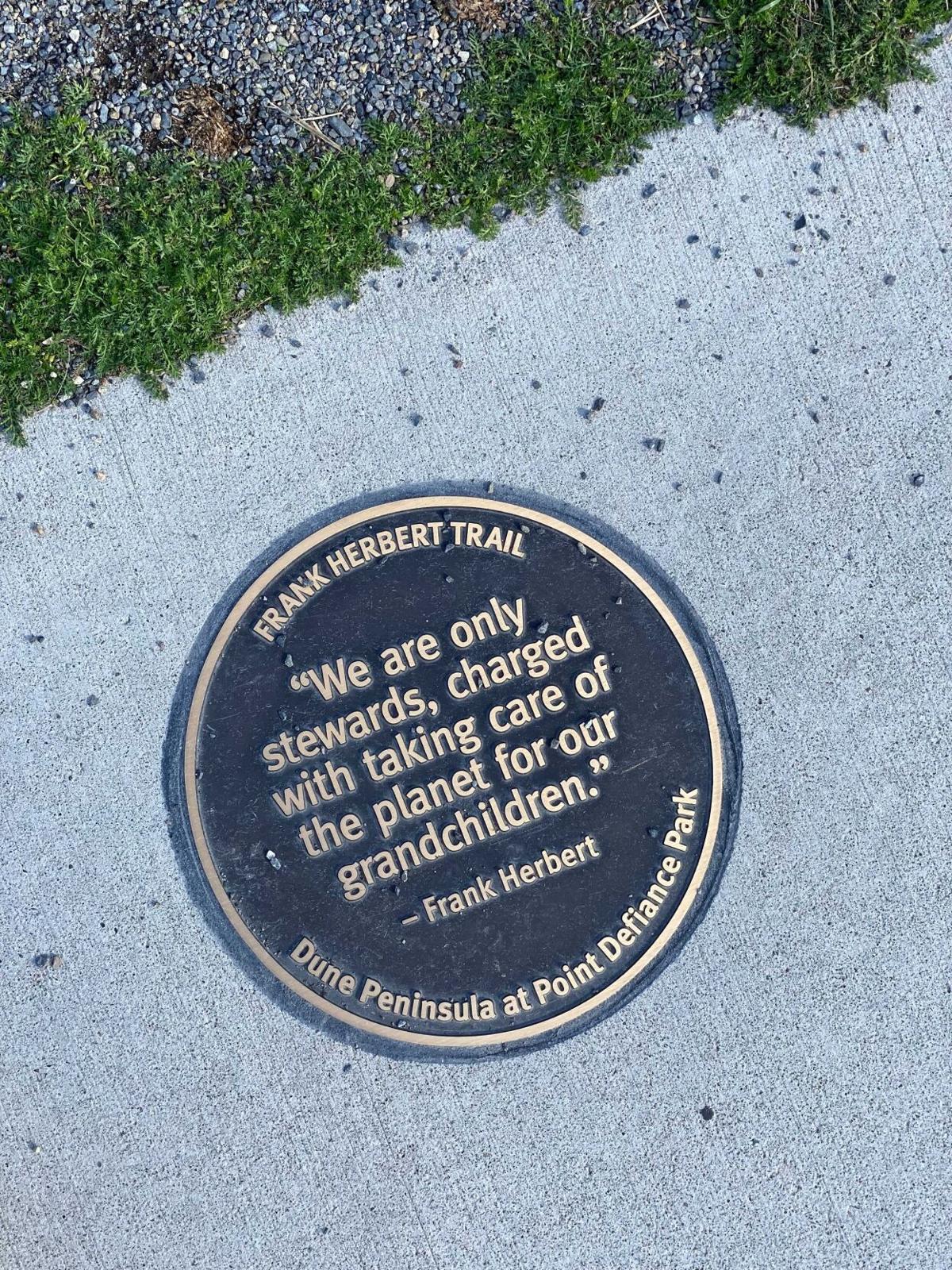 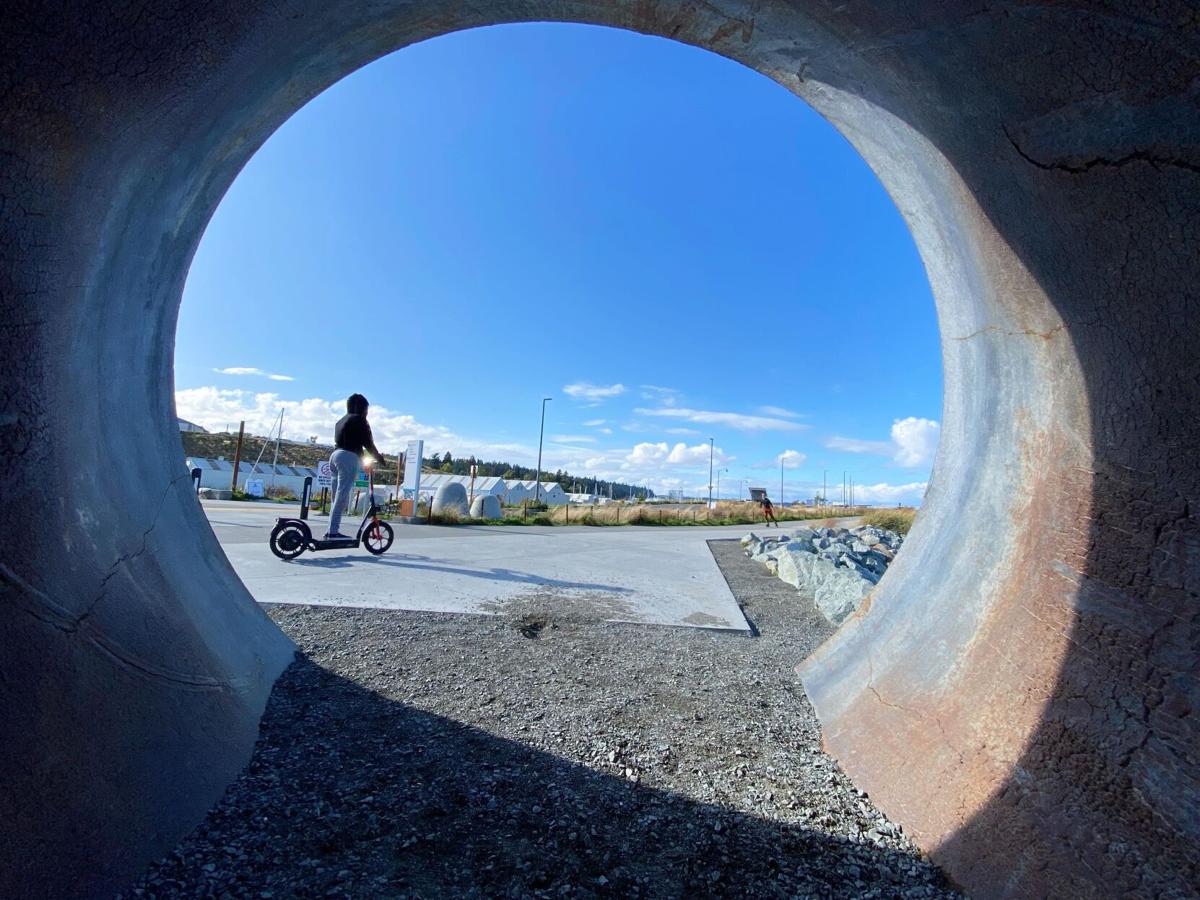 It’s the first day of October, and at the Tacoma-based Point Ruston’s Century theater moviegoers settle into oversized plush chairs with their (seemingly) gallon-size sodas and boxes of Junior Mints and Twizzlers, waiting for their movie to begin.

Though no part of the movie they’re about to watch was shot in Tacoma, and though no cast members hail from the city (to our knowledge), the movie’s significance undeniably has major ties to not just Tacoma, but the very land upon which the moviegoers sit.

The flick in question is an adaptation of the novel Dune by Tacoma son Frank Herbert. This Warner Brothers film directed by Denis Villeneuve and starring Timothée Chalamet is just the latest take on the cult classic. Other iterations include David Lynch’s divisive 1984 adaptation and a better-received, William Hurt-starring miniseries from 2000.

While some theatergoers might revel in the film’s local significance, others might be unaware that just a 0.7-mile, four-minute walk down the shoreline lies the very land that underscored Herbert’s writing with an urgent message about the survival of a planet.

Here at Dune Peninsula at Point Defiance, the scene is very different than that inside the darkened theater, with its action-packed science fiction sequences and booming audio.

A strong, steady fall wind sends ripples through the water, cascades up and over the tall grass abutting the shore, and buoys the rainbow- striped kite of a parkgoer. The Point Defiance/Vashon ferry glides silently toward the distant shore while the faint voice of a parkgoer heaping praise on his fetching dog is just barely audible over the tinkling of moored boats and the chirping of the summer’s last cicadas.

The idyllic scene at the park — only made better on a clear day by the juxtaposition of the Tacoma cityscape underscoring Mount Rainier — is one that in Herbert’s day was very different.

Born in 1920, Herbert grew up in the heyday of the American Smelter and Refining Co.’s (ASARCO) reign over the land near Point Ruston. He saw firsthand the impact of the copper refinery while recreating in the bay. After swims across the Tacoma Narrows or canoe trips to the San Juans, the 2.5-million-brick, 571-foot-tall belching ASARCO smokestack always served as a beacon that beckoned him home.

From its founding in 1888, the site had been known as the Ryan Smelter, a lead-refining operation founded by a man named Dennis Ryan. Ryan sold the company to William Rust two years later; he modernized the plant and changed the name to the Tacoma Smelting and Refining Co. ASARCO didn’t arrive on the scene until 1905, when it purchased the plant from Rust for $5.5 million and, seven years later, converted the operation from lead to copper. A 30-year Port of Tacoma lease agreement around the time of Herbert’s birth served as a catalyst for extensive expansion over the next few decades.

As he grew, Herbert discovered a flair for writing, a talent that led to careers in journalism as well as speechwriting and public relations for political campaigns. It was during an election in the late 1950s that Herbert visited the coast near Florence, Oregon, where he discovered the titular dunes of his eventual science-fictional planet, Arrakis.

At that time, the dunes were spreading — enveloping the land and burying nearby houses — so the U.S. Department of Agriculture was endeavoring stop the process by planting seagrass. Herbert was intrigued. He even chartered a plane to view the dunes from the sky. Over the next several years, Herbert immersed himself in research about Arab culture, desert warfare, ecology, religion, and history. Slowly, the story of a planet short on water but abundant with a galaxy’s most-sought-after drug began to take shape.

What we know today as Dune — and its sequels — was originally serialized in the 1960s in Analog magazine. The piece ran in three installments, the first of which clocked in at 85,000 words and for which Herbert was compensated $2,295. The publishing rights for the novel were eventually snagged, oddly enough, by the Chilton Book Co., known far and wide for its many auto repair manuals and not much else. That didn’t stop Dune, however, from becoming one of the highest-grossing science fiction novels in history.

Meawhile, ASARCO — once heralded as one of Tacoma’s most dependable employers and most prosperous companies — had created an environmental blight by contributing high levels of lead and arsenic to the atmosphere. This eventually led the plant to be labeled as one of the most polluted sites in the country. It was shuttered in 1988.

An eight-stage cleanup was mandated by the Environmental Protection Agency (EPA). The organization called for “demolishing structures, excavating soil and slag from the most contaminated locations, disposing of the contaminates, plugging or removing surface water drainage, capping the project area, protecting the site from erosion, continuing monitoring impacts on groundwater and marine sediments, and integrating cleanup with future land use plans,” according to historylink.org.

In 2019, Metro Parks Tacoma unveiled Dune Peninsula at Point Defiance, a stunning landmark on the blighted land where the ASARCO plant once stood. The monument serves as a testament to both Herbert’s legacy and Tacoma’s commitment to environmental stewardship.

“What I love about the name Dune Peninsula is that our collective actions to open this park mirror the story of the book,” Erik Hanberg, an elected member of Metro Parks Tacoma’s Board of Park Commissioners, wrote in a 2019 article about the park. “In the book, a group of characters called the Fremen are planning to restore the planet’s environment after its ecological collapse. And that’s very much what we’ve done with this park today. We’ve taken a wasteland — a wasteland created by the very smelter that helped inspire Dune, no less — and we’ve turned it into a beautiful park.”

Artist Nicole Rathburn was one of the artists commissioned to install a public art display on the land. Her piece titled Little Makers can be found atop one of the park’s crested hills representing the sandworms that called Herbert’s fictional wasteland home.

In designing the installation, Rathburn said she recalled her earlier reading of Dune and combed through old interviews with Herbert as a jumping-off point. “Then (I saw) the imagery of the sandworms in the books and from other people who were fans of the series, and then I kind of threw my own artistic spin on it, too,” she said.

The juxtaposition of art like Rathburn’s and the environment is one that Hanberg said is especially relevant.

“For many years, the tourism slogan for Tacoma was ‘Where Art and Nature Meet,’” he wrote in that 2019 Metro Parks article. “That perfectly describes Frank Herbert. And, looking around at this beautiful setting, I can’t think of a more perfect spot to remember him, and the promise of the novel Dune.”

If parkgoers can take their eyes off the stunning landscape and slow their electric scooters, they’ll notice the plaques of the Frank Herbert Trail underfoot. Each plaque contains a historical fact about the site, a passage from Dune, or a Herbert quote.

One such Herbert quote seems perhaps more prescient than the rest: “We are only stewards, charged with taking care of the planet for our grandchildren.”