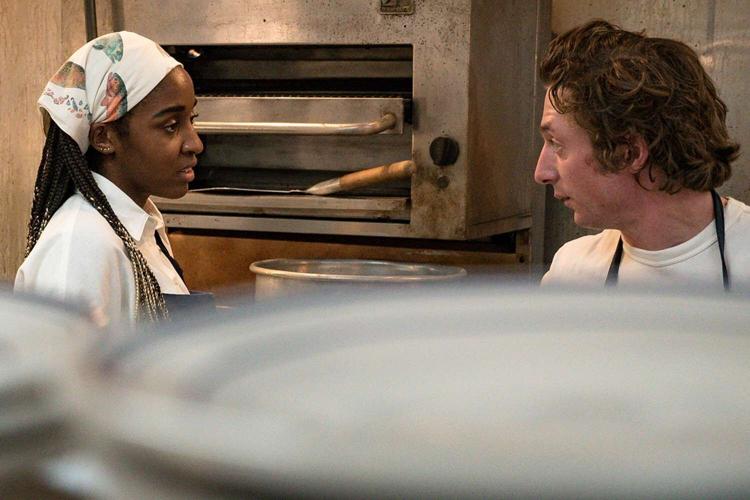 Ayo Edebiri and Jeremy Allen White in 'The Bear.' 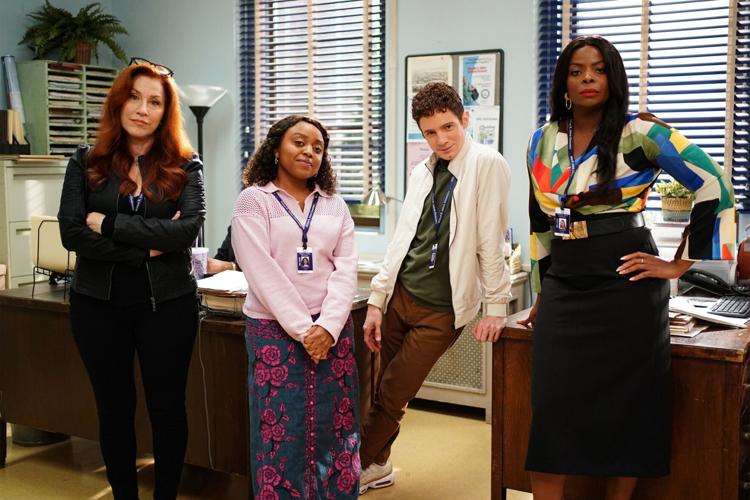 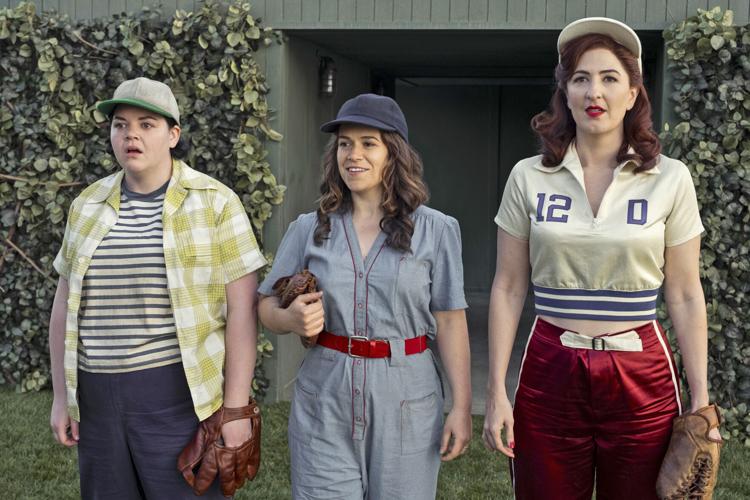 Melanie Field, Abbi Jacobson and D'Arcy Carden in 'A League of Their Own.'

Our inaugural A&E "year in review" series continues this week with our staff's favorite TV shows of the year. Read last week's chapter, on the magazine's favorite albums of 2022, here.

Olivier Assayas’ miniseries expansion of his 1996 moviemaking satire Irma Vep wasn’t a work for which most people — even fans of the film acting as its foundation — were waiting on the edge of their seat. But it proves itself an immediately worthy spiritual sequel, astutely satirizing the dire state of modern filmmaking while orbiting around Mira (Alicia Vikander), an A-list actress best known for superhero movies, as she tries expanding her range in a possibly doomed French art film. — Blake Peterson, digital content manager

I can’t have been the only Parks and Recreation fan who saw that Adam Scott was starring in a new Ben Stiller-directed show called Severance and expected a comedy. Instead, I got a corporate thriller in which Scott’s character is employed by a company that requires the titular severance procedure to cleanly separate his work and home lives. This work/life balance initially sounds intriguing, but imagine working as a blank slate or being at home with no knowledge of what you do for a living. Intrigue abounds as Scott and his coworkers attempt to merge their respective identities. — Joanna Kresge, managing editor of 425 sister publications 425 Business and South Sound Business

Lisa McGee’s family-focused comedy series follows teenager Erin (Saoirse-Monica Jackson) and her secondary-school friends as they navigate life in Derry, Northern Ireland, during The Troubles of the 1990s. Northern Ireland could be a dangerous and painful place to grow up at the time, but that reality doesn’t stop its young characters from doing foolishly teenager-y things, with Erin and her crew having a particular talent for getting themselves into absurdly knotty situations. The show is effortlessly funny, but reminders of the era’s societal hardships seamlessly bleed into every episode, sobering the fun and games the show otherwise relishes in. — Alex Schloer, designer

I’m all about keeping an organized home. So when I discovered The Home Edit, I unsurprisingly inhaled its first two seasons. Hosts Clea Shearer and Joanna Teplin make organizing look simple as they help both celebrities and civilian clients achieve the tidy spaces of their dreams. (My favorite project so far: the stunning revamp of Lauren Conrad’s nonprofit headquarters.) Their technique — “edit, categorize, and contain” — has become a useful motto when refining spaces in my own life. — Stephanie Quiroz, staff writer and designer

The Bear (FX on Hulu)

Christopher Storer’s fevered dramedy about an acclaimed chef (an excellent Jeremy Allen White) who returns home to take over his family’s restaurant after a tragic death arrived earlier this summer fully formed. The show is rife with knockout performances — specifically Ayo Edebiri’s and Ebon Moss-Bachrach’s — big laughs, and mountains of stress, most sharply coalescing in the instant-classic seventh episode capturing a practically cursed day at the restaurant all in one unbearably intense take. — BP

My wife and I try to catch this long-running news show every Sunday for its in-depth stories on vital topics/events/people around the world. The show’s well-done segments exemplify great journalism all the way around. — John Stearns, staff writer

This del Toro-created horror anthology series features eight modern horror stories told with Gothic, Grand Guignol flair. Episodes are directed and written by established and up-and-coming filmmakers alike; two episodes are co-written by del Toro. Because each has its own distinct story and approach, both horror fans and those typically averse to the genre will find at least one scare suitable to their tastes. — Kimberly Quiocho, intern

Set 200 years before Game of Thrones, House of the Dragon follows the Targaryen civil war over the succession of the throne, known as Dance of the Dragons. As much as I love the show and the story being told, I like the behind-the-scenes supplement, The House That Dragons Built, even better. Showcasing the amount of research and work that goes into creating this intricate series, it’s made me want to dive even deeper into this world whose creation I now appreciate tenfold. — Meagan Phillips, designer

Ethan Hawke’s wide-ranging documentary miniseries about the lives and careers of power couple Paul Newman and Joanne Woodward will one day — if not already — be looked at as a gold-standard celebrity doc. Eschewing hagiography in favor of often brutal honesty, and turning the talking-head documentary convention on its head with invigorating results, The Last Movie Stars makes you fall in love with Newman and Woodward all over again, this time as people and not just astronomic talents. — BP

A League of Their Own (Amazon Prime)

I’m a sucker for the original movie, which was uniquely feminist for the early 1990s. Hold the 1992 classic up to its 2022 counterpart, though, and you’ll notice that it falls far short by way of intersectional feminism. That’s where Abbi Jacobson’s Amazon Prime take sets itself apart, and, as a result, soars. Rosie O’Donnell cameo notwithstanding, don’t go into the series expecting to find too many callbacks to the original. This latter-day League of Their Own movingly highlights of the experiences of Black and queer characters overcoming the societal restrictions and expectations of the era, all for the love of baseball. — JK

This prequel to my all-time-favorite Star Wars movie, Rogue One, follows a thief named Cassian Andor (Diego Luna) as he evolves into a Rebel Alliance spy in the five years leading up to the movie. By offering an until now largely unseen look at the cruelty existing in its world and additional insight into why people were so hellbent on ousting the Empire, the show refreshingly feels unlike any of the other Star Wars shows released so far. — MP

The Groundhog Day-esque Russian Doll would have been just fine as a mere one-season affair. I wasn’t hopeful about its second, but that quickly evaporated once it became clear that it wouldn’t be a stale redux. It again drops in on scrappy New Yorker Nadia (Natasha Lyonne), who in the first season inexplicably kept dying and living the same day over and over again. This time around, she’s found a trick to travel back in time. The show once again never quite goes where you think it will and is anchored by a Lyonne performance so effervescent that a season never feels like enough time with Nadia. — BP

The second season of Danny McBride’s riotous satire — which follows the misadventures of a morally bankrupt televangelist clan led by the fickle Dr. Eli Gemstone (John Goodman) — is its finest yet, functioning beautifully as a slapstick comedy and family melodrama in the Dallas mold in equal measure. — BP

I know I’m showing my age here, but I just can’t quit this two-decades-running procedural. Though most of the original cast has departed, this crime show continues to capture my interest. Maybe it’s the throwbacks to my own days as a military photographer, when I would work alongside the Air Force’s NCIS equivalent photographing crime scenes. Or maybe I still have a crush on Sean Murray (special agent Tim McGee), who first caught my eye as Thackery Binks in Hocus Pocus. I suspect, though, that after all these years it’s the dynamic characters that keep me coming back. — JK

The final and sixth season of This is Us was the gentle goodbye hug all us longtime fans were hoping for. The family drama has followed the lives of the Pearson family across several different time frames, and though it was hard to say farewell, having gotten attached to its cast of characters since the show’s 2016 premiere, the show ended on a touching, characteristically teary high note. — SQ

The second season of Quinta Brunson’s elementary school-set mockumentary has somehow been even better than its already uncommonly wonderful debut run. Saying the series, as much a comforting sitcom as an incisive indictment of public-school underfunding, has gotten into a groove isn’t entirely true: its identity was immediately and confidently established. But the terrific ensemble has managed to level up to the point that every performance (Brunson focuses on the school’s tight-knit faculty rather than on the students) has a standout shine. — BP

John Stearns is a staff writer.

Stephanie Quiroz is a staff writer and designer at South Sound.