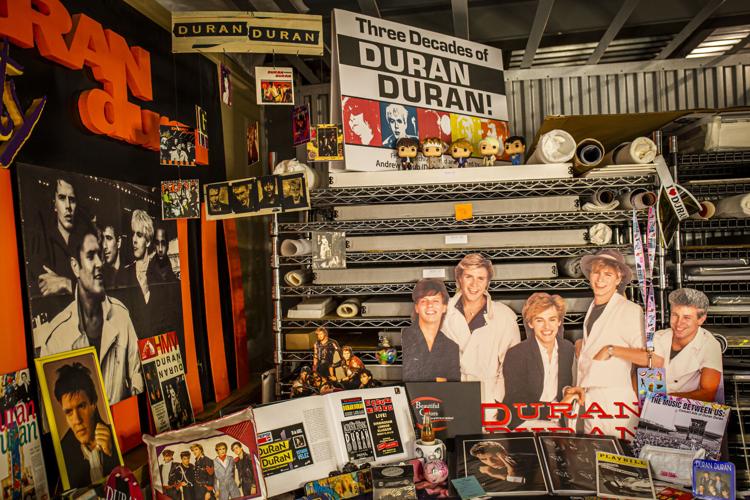 “We’ve built something that makes a difference,” Golub said. 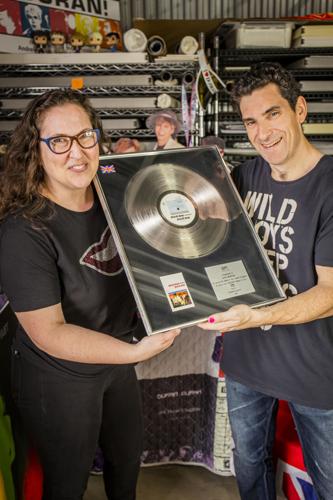 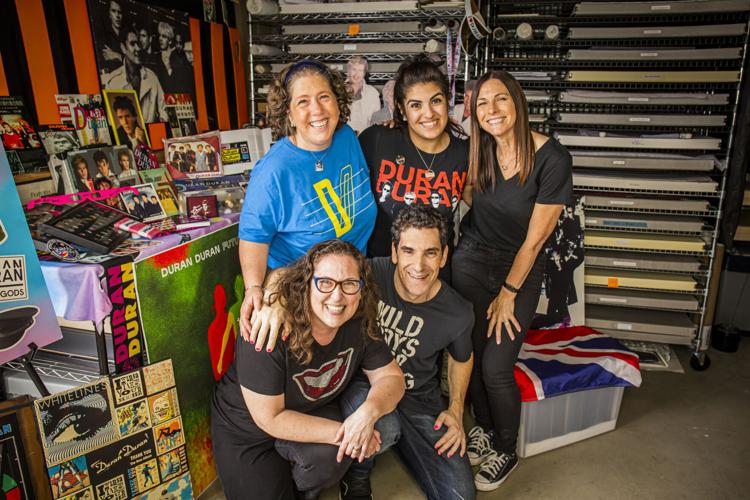 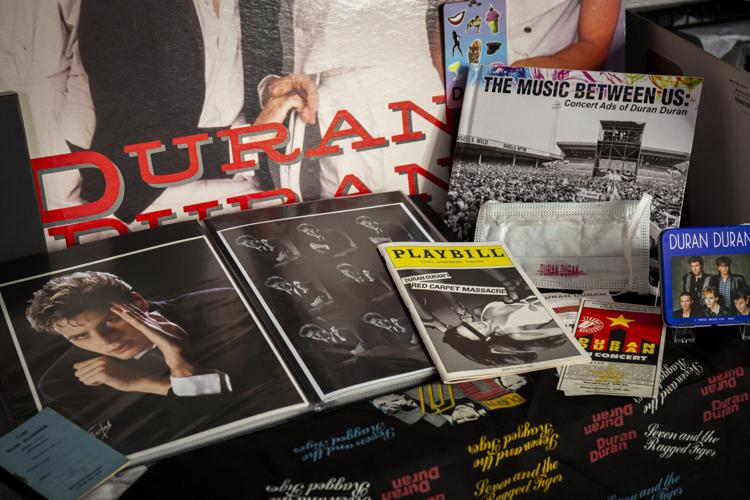 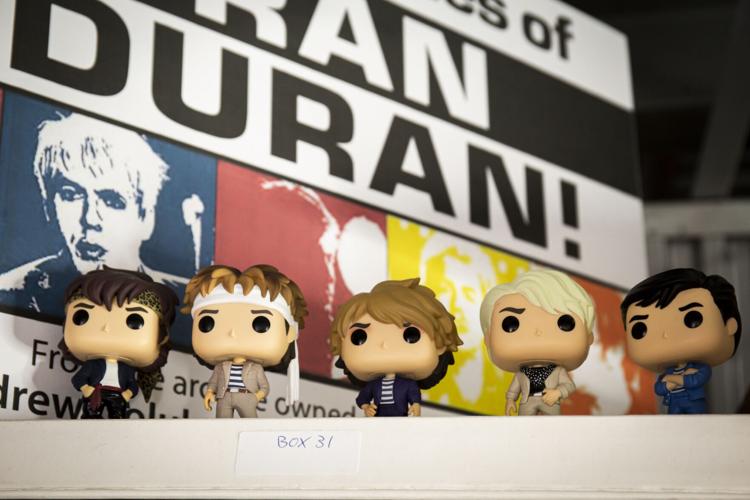 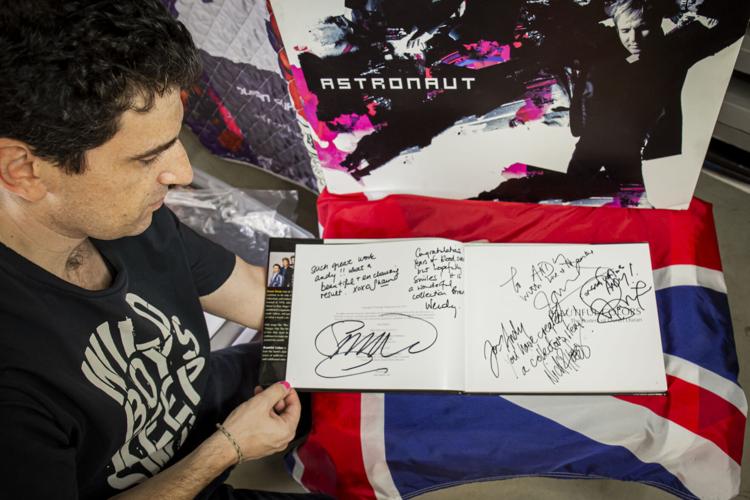 Outside of Golub’s work with The Archive, he’s the author of two self-published books: 2013’s Beautiful Colors: The Posters of Duran Duran and 2016’s The Music Between Us: Concert Ads of Duran Duran. 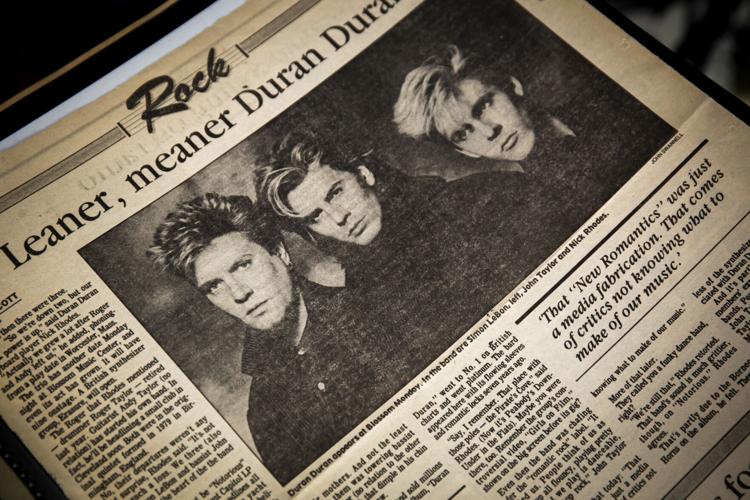 The Archive is more than its collectibles for Golub — it’s also a way to connect with fans and make them feel comfortable in a fandom that might strike others as odd. 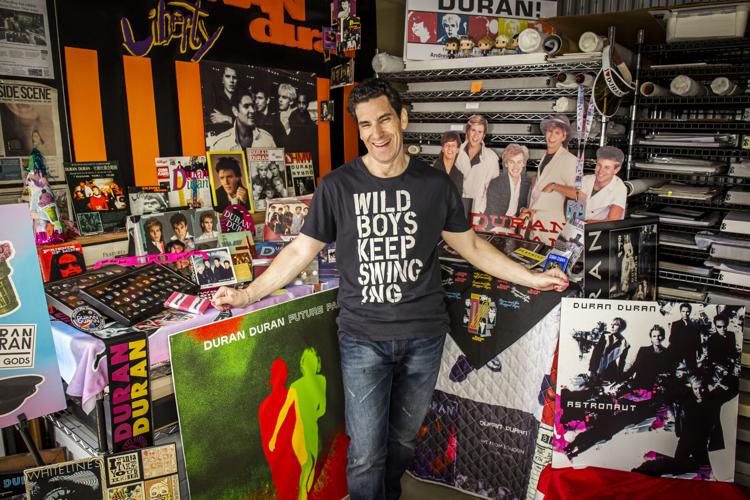 Andrew Golub — also known as “Durandy” — has spent more than half his life amassing what likely is one of the world’s largest collections of Duran Duran memorabilia. 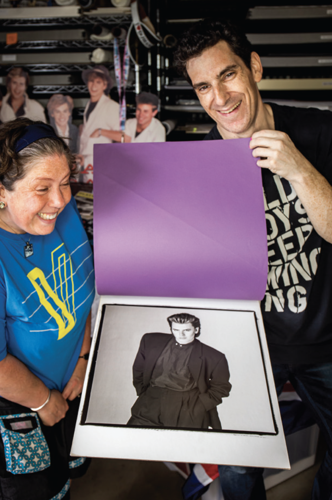 Golub's passion for Duranies grew with the onset of the pandemic. (Jennifer Walsh and Andrew Golub)

Music can be transportive. One song can instantly take you back in time — like an olfactory response where sound is traded for scent. Hearing the iconic opening notes of Berlin’s “Take My Breath Away” might revive memories of high school proms; Joni Mitchell’s “A Case of You” could trigger memories of a past relationship; Aqua’s “Barbie Girl” could take you back to your best friend’s birthday party at Skate King.

For Andrew Golub, Duran Duran’s “The Reflex” brings him to the passenger seat of his mom’s car parked at Tower Records when he was 12 years old. It was the first Duran Duran song he heard — and he immediately got hooked.

It’s been almost 40 years since that fateful day. Since then, Golub — also known as “Durandy” — has spent more than half his life amassing what likely is one of the world’s largest collections of Duran Duran memorabilia. Golub’s collection fills a 10-by-20-foot storage unit in Bellevue, also known as “The Archive.”

The Archive is like a museum. Golub has meticulously organized every inch of the unit, with everything arranged in order, by year, country, or band member. His collection includes oversized 60-by-40-inch posters rolled in canvas; original unpublished photos stored in special Mylar sleeves; and jackets, buttons, stickers, socks, lunch boxes, underwear, and even hot sauce. Even Duran Duran knows of Golub and The Archive; the band considers him its unofficial official archivist, he said.

Duran Duran fans — also called “Duranies” — are among the most fervent fan communities, with many traveling globally to visit The Archive. Each guest is treated to a personally catered experience of the collection: Golub will pull out memorabilia featuring more of a fan’s favorite member or favorite “era,” for example. Golub said most visitors have seen only 60–70 percent of The Archive’s contents due to its incredible depth.

“I invite them to share their memories,” Golub said. “Being able to zero in on the little kid inside them … It’s something everyone can relate to. It’s a powerful force; it’s happiness at its most basic level.”

The Archive is more than its collectibles for Golub — it’s also a way to connect with fans and make them feel comfortable in a fandom that might strike others as odd.

“It takes courage to be yourself,” Golub said. “Duran Duran is a positive force for people … Duran Duran has helped people through life’s challenges. And that’s what keeps me connected to my own story.”

SHARON RACKAM KING FIRST HEARD Duran Duran at a friend’s house when she was 12. She was instantly mesmerized by their image and experimental use of synthesizers (she was learning piano at the time) and remained a fan over the years. In the early ’00s, she heard about Golub on a chat board. She emailed him a question she had about a small detail in one of the band’s music videos she’d always been curious about.

“He emailed me back almost immediately,” she said. “He was so kind, so warm … it was like we were best friends already.” King, a Corvallis, Oregon, resident, wouldn’t meet Golub in person until 2016 at his exhibit at The Washington State Fair, and wouldn’t see The Archive until 2019.

“The depth, the condition, the … everything was just unbelievable,” King said about her first time visiting The Archive. “It was the warmest hug of an experience. It was just a (culmination) of love, nerdiness, and a celebration of music.”

Most Duranies who meet Golub and visit The Archive have had similar experiences. Marsella Quinones, a lifelong Duran Duran fan who first was introduced to the music by her father and also met Golub in 2016 at his Washington State Fair booth, credits Golub with having a big influence on her life.

“(Andy) told me about The Archive, and he introduced me to other Duran Duran fans — and those people are now my closest friends,” the 26-year-old said. “Andy kind of ‘adopted’ me and welcomed me into this community. Music is a community, but this community goes beyond that. And Andy plays a big part in it. His love for the band and his love for people are something special.”

“Andy is the warmest, most excited person ever,” King added. “He (and The Archive) are like … serotonin personified.”

GOLUB'S PASSION FOR DURANIES grew with the onset of the pandemic. Since people couldn’t visit The Archive in person, Golub brought The Archive to them via Zoom. Just days after the state’s stay-at-home order went into effect in March 2020, Golub started hosting a weekly “Duranie Distraction” (now “Durandy’s Den”) series where he and fans bond over their favorite band’s music. (Now, it occurs monthly.)

Golub saw this as a chance to create a forum to reach out and connect with friends and fans in a time of isolation. “I wanted to make room to comfort people during that time, and it turned into the most beautiful thing,” he said. “It is what it is because of what people bring to it. It’s been very meaningful.”

Outside of Golub’s work with The Archive, he’s the author of two self-published books: 2013’s Beautiful Colors: The Posters of Duran Duran and 2016’s The Music Between Us: Concert Ads of Duran Duran.

The first, which was recently rereleased, examines Duran Duran’s career through posters and includes a foreword from Duran Duran’s Nick Rhodes. The second looks at Duran Duran’s influence on audiences worldwide, seen through the lens of fans’ concert memories. Both books are available on Amazon, and Golub includes a personalized note with every order.

Despite the long list of things Golub has done to show his devotion to the band and the fans, he winces when someone complimentarily refers to him as Duran Duran’s No. 1 fan.

“We’ve built something that makes a difference,” Golub said. “This band brings out the best of who we are. We’re strong and resilient, and we have nothing but pure love for each other. I’ve been able to follow my heart to preserve these things and share them and make friends — and it’s all priceless. There’s no No. 1 fan, because there’s room for all of us at the top. We all have our own story and our own journey, and Duran Duran has been a part of that.”

This article originally appeared in the September 2022 issue of our sister publication 425.