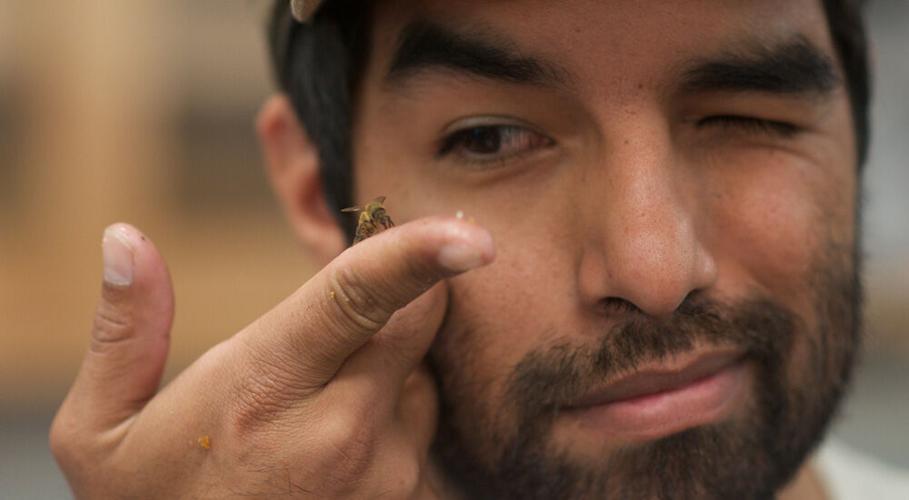 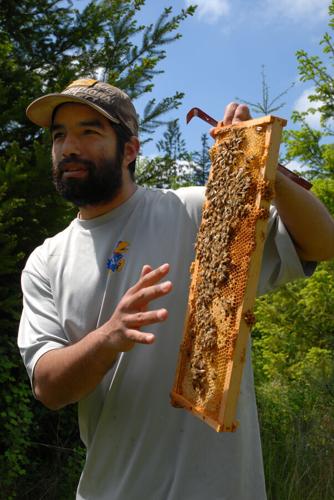 Many people have heard about the alarming rate at which bees are dying. Some respond by buying T-shirts demanding we “Save the bees”; others, by planting bee-friendly flowers or even deciding to invest in a backyard hive.

Among the most highly publicized culprits for declining bee health are pesticides and even some herbicides. But a lesser-known, and potentially equally dangerous, foe has been identified as the single-most serious problem causing colony losses today: the varroa mite.

Danny Najera, a biology professor at Green River College in Auburn, has dedicated his career to researching honey bees, which captured his attention as a student because of their complexity and intelligence. Thanks to his research, he is intimately familiar with the varroa mite and the havoc it can wreak on a colony.

“Recently, there have been a lot of issues with the beekeeping industry, and there have been fewer bees in the world,” said Najera as he drove toward the two hives that live in the college campus’ forest and are maintained for educational purposes. “It was easy to turn my talents as a beekeeper into looking at how we can figure out how to save the bees.”

The bee scare, Najera said, first started in 2006, when huge beekeeping operations lost 80 to 90 percent of their colonies for no apparent reason. For the following two years, these disturbing statistics continued in a phenomenon that would later be coined “colony collapse disorder.”

Scientists still don’t know exactly why colony collapse disorder happened in the late 2000s; by 2009, the inexplicable loss of millions of bees had passed (though bees still suffer from other problems). Still, the importance of bees was suddenly on people’s radars — and people wanted to help.

“You see the number of people in beekeeping organizations double and then triple within the five- to 10-year period afterwards,” said Najera. “More people wanted to keep bees in their backyard. Unfortunately, there’s a lot about beekeeping that they didn’t know initially.”

One important piece of knowledge that many backyard beekeepers lacked — and continue to lack — has to do with varroa mites: how to treat them, when, and why. Many new beekeepers let their colonies become infected — an infection that then spreads to other bees.

“We definitely educate on more than just the mites; it’s just that the mites are so crucial,” said Najera. “We did a study a couple years ago involving a hundred hives, measuring a ton of variables on why the bees might be dying over winter. We spent (about) $10,000 developing all these sensors to measure different factors. And it all came down to mites. The only thing that predicted the colony living or dying was the mite count. And so that became our focus.”

Research shows that it takes only three varroa mites per 100 bees to threaten a colony, which is typically made up of about 40,000 bees. Mites are a parasite that doesn’t kill bees outright but spreads viruses that cause them to die when they are hibernating over winter. Infected bees travel within a 2-mile radius of their colony, and mites can easily jump from bee to bee. A single infected hive can spread the mites among many colonies within a 4-mile radius.

It makes sense, then, that the varroa mite is responsible for a massive amount of honey bee deaths since it was introduced to the United States from Asia in 1987. Najera believes that people’s go-to approach of treating the varroa mites with harmful chemicals only made them stronger and more resilient — transforming them into the bee plague they are today.

Left to its own, nature should be able to correct the stark imbalance that currently exists between the mite and the bee. Either that, Najera said, or one species would go extinct.

“Nature isn’t perfect. The fear of losing the honey bee is too great right now for us to stop treating for mites and see what happens.”

So, Najera has committed himself to improving the current state of treatment and data collection. Because the varroa mite is a ubiquitous killer of honey bees, it is necessary that beekeepers keep track of their mite counts — how many mites fall off the bees’ bodies and onto a pan underneath the colony after treatment — so that better research can be done in tracking their patterns.

Najera has been collecting data on his own for seven years; in the last three, he has worked with Green River College’s IT department to develop a web app called Mite Busters that lets people input their mite counts and search relevant data by their ZIP code.

“I go to beekeeper associations to speak, and I always start off with asking how many beekeepers know what their mite counts are right now,” said Najera. “Only 10 percent of their hands go up. A huge part of the problem is that most of the beekeepers are not checking what their mite levels are, and since they aren’t checking, they aren’t doing anything.”

Treatments range from chemicals to essential oils to shaking powdered sugar over a colony. Approaches that don’t use synthetic material are better for the overall health of the ecosystem; they also, unfortunately, tend to be more laborious.

Though Najera cares for the honey bees and has spent his life learning about and from them, he does not see the possibility of their extinction as an event that would necessarily be catastrophic.

“If honey bees go down, I think modern agriculture would see a significant hit. But there are other bees — mason bees, bumble bees — and they don’t appear to be affected by this mite. We’re super lucky that this thing is not moving from species to species,” said Najera.

And if all bees were to go extinct?

“I’m too much of a biologist to believe that humans will die if bees die,” he said. “If you look across the world, 60 or 70 percent of the nutritional calories that go into people’s bodies are from things that don’t require pollination.”

Corn, wheat, and rice would go unaffected; it would be the luxury foods — fruits, vegetables, almonds — that would disappear.

“The plate would change for sure,” Najera said. “But I think that as humans, as Americans, we have become too accustomed to being able to have a pineapple and a strawberry and a potato all in the same meal. All of those come from different continents originally. And you know, we’re not entitled to that.”