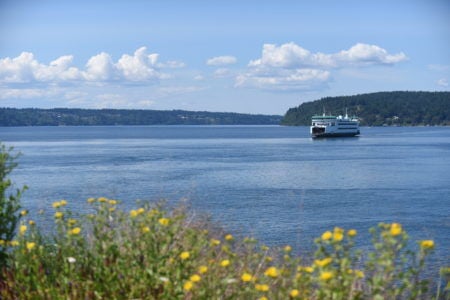 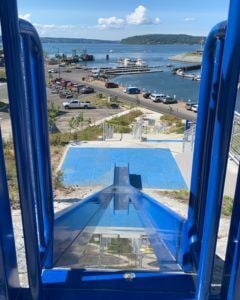 In a past life, the picturesque peninsula off of Ruston Way was a mass of molten slag — by-product from the ASARCO smelter, abounding with arsenic and lead. Enormous cast iron kettles would pour load after load, layer after layer, of the contaminated material onto the site until the 26-acre peninsula was formed.

It’s no wonder the area conjures up a dystopian image of environmental devastation, as it did for acclaimed author Frank Herbert. Herbert was born in Tacoma, and the smelting plant impacted his environmental leanings as well as his writings. He authored the legendary science fiction series, Dune, which follows the story of a rebel group terraforming a desert planet. Terraforming — for those who aren’t sci-fi enthusiasts — is to alter an area’s ecosystem so that it can support human life.

And so, it seems fitting that this peninsula, which underwent its own version of terraforming to transform it into the park we see today, act as a tribute to Herbert. Dune Peninsula was the name chosen for the new park at Ruston Way and Frank Herbert Trail is the path that weaves through it.

Today, the park seems more utopian than dystopian. Fields of green grass and lightly swaying prairie shrubs extend to the water’s edge, where a slow-moving ferry meanders across the bay. From atop one of the sail mounds — constructed rocky hills creating vertical depth in the park – visitors can see everything from the old growth forests at Point Defiance to Mount Rainier towering over the Tacoma Dome.

Even more meaningful is the moment one realizes that this project, the largest in Metro Parks history, actually connects those old growth forests to the rest of Tacoma. The Wilson Way Bridge, named in honor of previous Metro Parks director Jack C. Wilson, is the first pedestrian access point connecting Pt. Defiance and Pt. Ruston.

Starting July 6, visitors can explore this new tourist destination and join the many whose eyes-widen at the sight of the transformation. We got a chance to tour the site while they were putting on the finishing touches — painting the pagoda, oiling the benches, brushing up the gravel aprons, etc. — and compiled a list of the things you can’t miss when the park opens up: