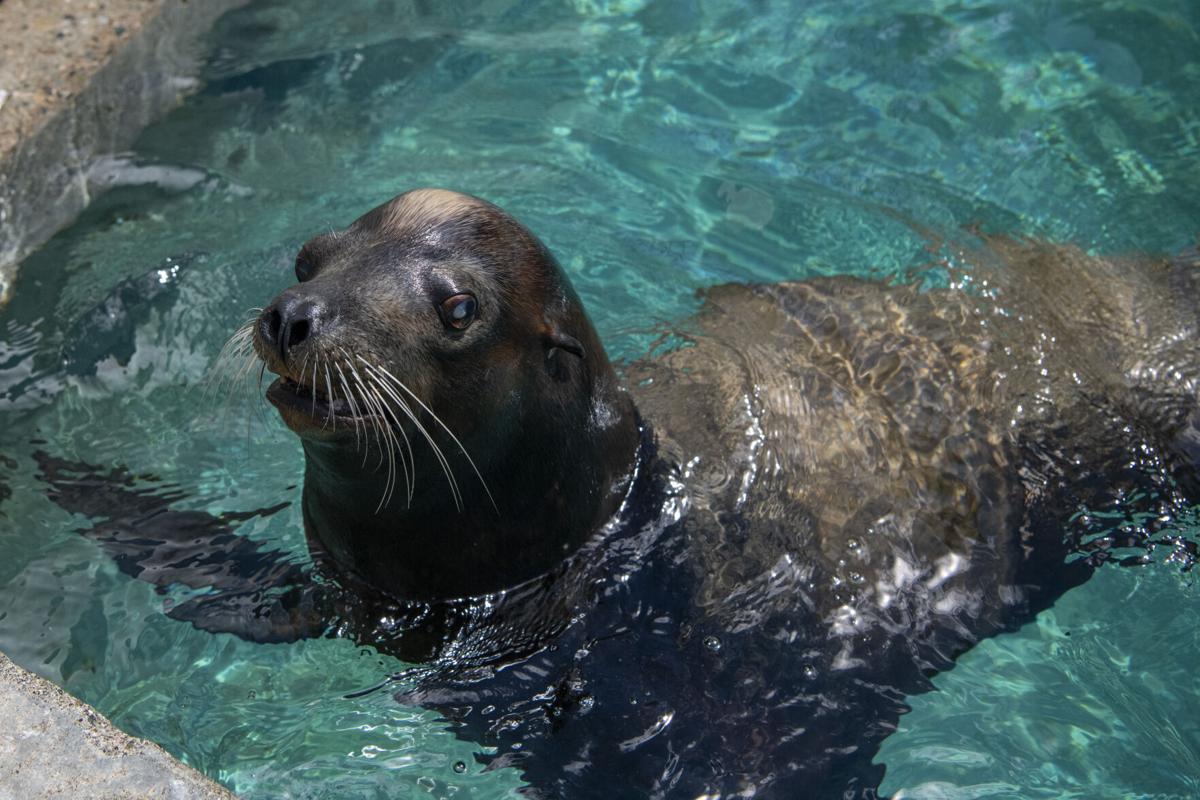 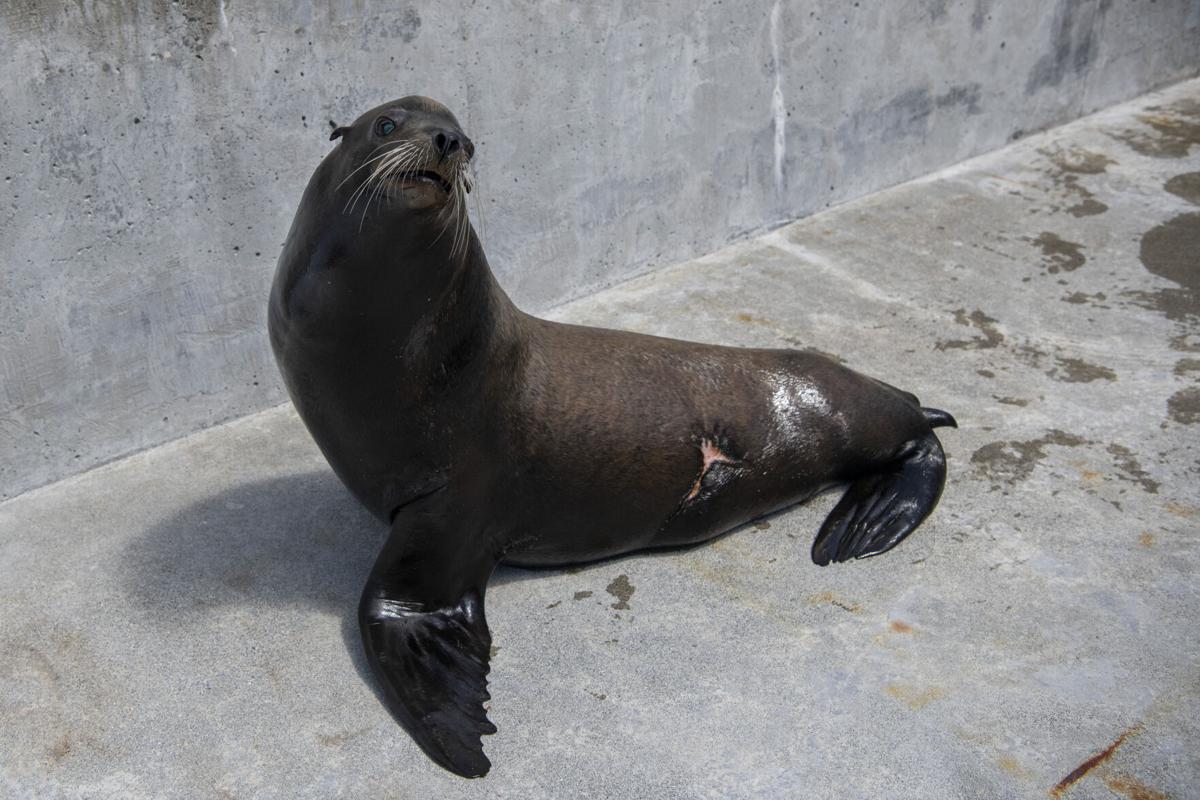 It was 11 a.m. on a warm July morning at Point Defiance Zoo & Aquarium’s Rocky Shores exhibit. No show or live talk was scheduled, but the presence of news crews from the Greater Seattle area signaled to zoogoers that something big was about to happen.

As visitors began to file into the concrete bleachers and line the craggy pathways abutting the exhibit, it was unusually quiet for a crowd of that size. Whispers began as the audience wondered what could be happening.

It had been 30 days since staff members from the Marine Mammal Care Center (MMCC) had ferried the blind male sea lion known as Björn — who had been brought to the Los Angeles rehabilitation center following his December 2019 rescue — to Point Defiance. On this day, the center’s president, Amber Becerra, and animal care team leader Kelsey Wong were back for a visit, and they sidled up to the side of a small pool where Björn was languidly swimming in clockwise circles.

Having just arrived as local media were setting up, Becerra spoke up for the first time, saying to Björn, “Say cheese! You’re the star today, buddy.”

It was at that moment that the blind marine mammal abandoned his laps and swam directly toward Becerra. “He pushed his little nose up to the fence and just basically gave me a little sea lion kiss,” she recalled later that morning, still surprised that the animal recognized her voice.

When he had arrived at Beccera’s center by way of its partner organization, Marine Animal Rescue, the sea lion had a healed wound on his side from a suspected shark bite and bullets lodged in his head, which is what vets suspect caused his blindness.

“A lot of times these injuries are coming from fishermen who see these animals as competition for their food, so they will hurt, harass, or shoot these animals to protect their livelihood,” Becerra said of many of the injured animals in need of rehabilitation that are discovered along the 70-plus miles of coastline in the center’s jurisdiction.

After going through triage, animals typically stay at the center for only three to four months. During that time, they are kept wild; they do not undergo training, nor are they able to imprint on caregivers. As evidenced by that sea lion kiss, Björn is certainly one of the exceptions.

“He’s a survivor, but because of his vision impairment, we knew we couldn’t release him back into the wild because he can’t hunt,” Becerra said.

That is where Wong stepped in. As a volunteer at the Aquarium of the Pacific, Wong learned a lot from the experts there about how to condition and train animals, particularly those with vision impairments. “I just learned auditory cues are the best ones — auditory and tactile,” Wong said.

For auditory, Wong used a target pole — imagine a metal rod with a bulbous white rubber tip, giving the appearance of a giant one-sided Q-Tip — to rap on a large wooden board. These are then followed by verbal cues, like “up”; “down”; “water”; “follow”; and, of course, “fish.” Tactile cues also utilized the target pole, as Björn can feel its movement with his vibrissa — whiskers that allow him to detect movement in the water.

“He learned pretty quickly that if he hears the word ‘good’ or if he follows me correctly, then I’ll give him a reward,” Wong said. “So, what he would do eventually was, he would follow me to one spot, I’d say ‘good,’ and he (would) just open his mouth.”

Eventually, Wong was even able to train the 400-plus-pound mammal to take voluntary medicine injections and engage in medical procedures. Th e only thing left to do was find Björn a forever home. Long exceeding the customary three- to four-month stay at the center, Björn remained for more than a year and a half.

“I’ve had this big burden … if a nonreleasable animal cannot find a home in a zoo or aquarium, then the government actually forces us to euthanize them,” Becerra said, noting that it’s trickier to place an adult male, due to territoriality. “So, it was literally life or death for Björn.

“But Björn is just a very special, gentle animal, and so we made videos about him and did our best to reach out to everywhere we knew, and Point Defiance stepped up,” Becerra continued.

This is not the first such animal rescued by PDZA. Several of its residents, including the late polar bear Boris, have lived long and healthy lives at the zoo after being deemed unreleasable.

“Björn has been through a lot in his young life, and we are honored to give him a second chance here at Point Defiance Zoo & Aquarium,” said zoo director Alan Varsik. “Our animal care staff is committed to giving Björn the best quality of life, for the rest of his life.”

Varsik and his staff are encouraged by what Björn can teach the next generation as an ambassador for his species and other marine wildlife. “He’s going to teach these people a lot about how to coexist with marine animals out in the ocean. … It’s their ocean, too, and we have to share it with them and figure out how we can survive together,” said the zoo’s assistant curator of marine animals, Sheriden Ploof.

“I think he (also) can teach us a lot about resiliency … it’s a very good lesson for us that if bad things happen, we just get back up and work with what we have.”

Coming out of the COVID-19 pandemic, Ploof said she finds her own inspiration from Björn, along with an especially relevant Disney quote.

“I always was taught to ‘just keep swimming,’ so whatever happens, that’s kind of my mentality, and it seems a little bit of his as well, as he’s showing us right now,” she said.

“He’s just a special guy; he wanted that second chance, and he got it,” Ploof said as she watched Björn exploring his new home for the first time.