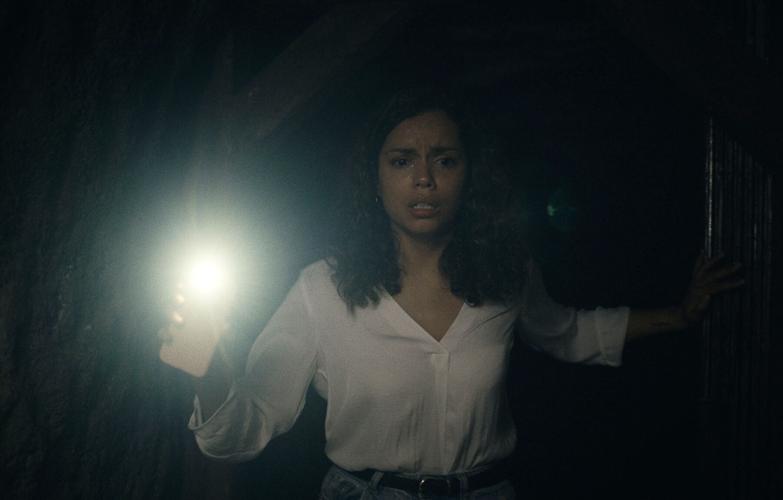 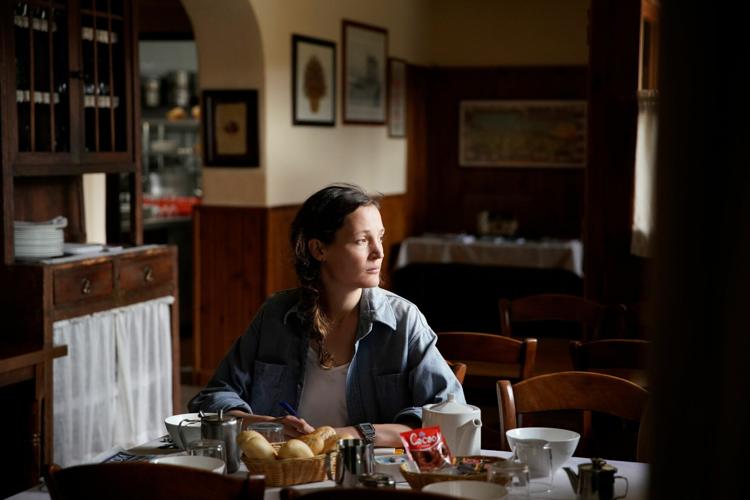 Vicky Krieps in 'Hold Me Tight.'

Cinema’s worst decision-makers tend to be found in horror movies. In the lots-of-fun new thriller Barbarian, the characters waste no time setting a new bar. As the film opens, a young woman named Tess (a revelatory Georgina Campbell) arrives at a home rental in a dilapidated, seemingly abandoned Detroit neighborhood in the middle of the night. After some struggle getting inside — no keys sit in the lock box as promised, and the help desk number leads straight to voicemail — Tess discovers, when a 20-something-year-old man (Bill Skarsgård) opens the front door, that the place has mistakenly been double-booked. Inconvenient as it is, the horror-movie fan in us wants Tess to drive to a hotel and worry about getting a refund tomorrow morning. We can’t be sure she’ll be safe with a stranger played by the actor who rose to fame as Pennywise the Clown in the recent It (2017) adaptation. And in a neighborhood seemingly left behind, who will hear her cries for help if he turns out to be a wolf in handsome-young-man clothing? But Tess, who has a job interview with a local documentarian tomorrow, decides to stay the night anyway, despite her ringing inner alarm bells.

She eases a bit when she and the sweetly awkward Keith — if that is his real name — talk over a bottle of red wine and bond over her prospective employer’s obscure last movie, whom Tess assumed nobody saw but her. They both make it to the morning; in a different movie, a romance almost certainly would develop. (They come awfully close to kissing good night.) But the horrifying secret history of the house will catch up with its latest visitors before anything so rosy might develop, precipitated by an excruciatingly suspenseful sequence where Tess trots down into the basement in search of toilet paper; discovers a secret hallway that leads to a cell-like room with a filthy mattress, camera, and bucket; finds out there are even more stairs; and then …  I won’t go further than that; I’ll cop the common critical refrain that it’s best to go into Barbarian not knowing too much.

Just when the movie offers its first direct scare (it’s all agonizing, perfectly stretched-out dread before then), into Barbarian abruptly steps AJ, the home’s POS owner. Played by an awesomely smarmy Justin Long, this TV actor, who has some rentals littered around Detroit and other cities for side money, absconds to the house after a bombshell Hollywood Reporter article alleges sexual misconduct. He thinks it weird, though hardly worrying, that there lie traces of occupants having been here — maybe still here — when he arrives.

The Tess and Keith story, and the AJ stuff, play like two separate movies; a great deal of the movie’s twisty-turny fun is finding out how they’ll connect. The first is an emotionally engaging one about likable people falling into a trap; the second seems like it’ll become a satisfyingly Tales from the Crypt-style tale about a jerk at long last getting his. The movie’s writer and director, Zach Cregger, scores laughs contrasting how these parties situate themselves in the house — particularly when it comes to their misguided explorations of its secret tunnels. Tess is shivery with fear, continuing forward while yelping the nowhere-to-be-found Keith’s name. AJ, meanwhile, is armed with a tape measure and preoccupied with how much more he could sell the house for with all this square footage he had no idea about. (He happens upon the freaky holding cell-like room without batting an eyelash; when he walks past some dried blood-stained cages, he thinks it odd but not worrisome enough to halt his determined market-value investigation.)

Everything comes together when Cregger inserts a chilling, explanatory flashback sequence — stylistically distinguished by its use of the instantly unsettling fish-eye lens — whose understatement only makes it scarier. Something easy to appreciate about the movie in general is Cregger’s avoidance of ever getting too explicit with answers and their attendant violence. Like the best horror directors, he understands how much scarier things feel when suggestion is preferred over frank depiction. He knows the imagination can cook up things potentially far worse than anything that could be staged on screen; Barbarian has some only-alluded-to profoundly nightmarish horrors that continue to rattle around in your head long after the movie has finished.

Barbarian has earned comparisons to last year’s Seattle-set Malignant, a James Wan horror movie so wackadoo it started feeling more like a gonzo comedy the closer we got to the finale. But aside from the visual resemblance of that movie’s primary antagonist and this one’s, I don’t think the films share much DNA. Barbarian’s comedy is far sharper and more subdued, for one thing. And its muted, never-belabored invocations of gentrification and #MeToo in the plot probably put it more in league with the era’s so-called “elevated” horror, though this movie is far more fun than most the films given that classification. Right down to the title-credit font it uses, Barbarian has more in common with the movies of Wes Craven (particularly 1977’s The Hills Have Eyes and 1991’s The People Under the Stairs), which often perverted the sanctity of the family unit supernaturally or otherwise and straddled the razor’s edge between true horror and morbid humor. Cregger has until now mostly only worked in comedy. With Barbarian, undoubtedly the horror movie to beat this year, it’s safe to say this filmmaker making a Jordan Peele-style pivot has found a new calling.

HOLD ME TIGHT, actor turned director Mathieu Amalric’s new movie, is a mosaic of grief. In the film, Vicky Krieps plays Camille, a woman living in a haze of sorrow after the death of her husband and their two kids (Arieh Worthalter, Anne-Sophie Bowen-Chatet, and Sacha Ardilly) in a freak accident. Amalric’s approach to the material (Hold Me Tight originates in a Claudine Galea play) is intriguing: it entirely plays out from Camille’s perspective, chaotically and inexplicitly pinballing to and from the present and past and Camille’s imagination, with several moments functioning as prolonged dramatic speculations around who her husband and kids might have been had they lived. (The first half hour or so of the movie deceives you into thinking Camille actually packed up her things and abruptly abandoned her family, until we learn that that’s just something she tells herself sometimes to pretend they’re still here.)

While Hold Me Tight’s methodical tessellation at first seems like a smart choice for this material, it eventually proves its Achilles’ heel. Amalric is much more concerned with making the film come across as fluidly impressionistic than in very substantially examining Camille’s inner life, her relationships with her late family members, or the practicalities of her immediate circumstances. (The movie says nothing of her surviving family members, friends, job, or now-dulled passions.) She’s mostly just a symbol of suffering. And for a film ostensibly looking to accurately recreate the caprices of Camille’s mind, it’s oddly deprived of views of the past, backward glances almost solely confined to the day of the accident without any inclusions of happy-or-otherwise memories. I want to say Krieps is excellent, but she isn’t given much to do besides look shattered. Because the movie around her is so barren of emotion that feels true and not drag-and-dropped, her dependably competent acting has the quality of a portable space heater trying to get a warehouse in winter up to room temperature. You sense her struggling under the weight of a movie whose suffocating vacancy muffles her work. Hold Me Tight’s formal approach is meant to forge a new kind of intimacy in the hard-to-perfect portrait-of-grief drama. But all it does, ultimately, is keep us at a distance.